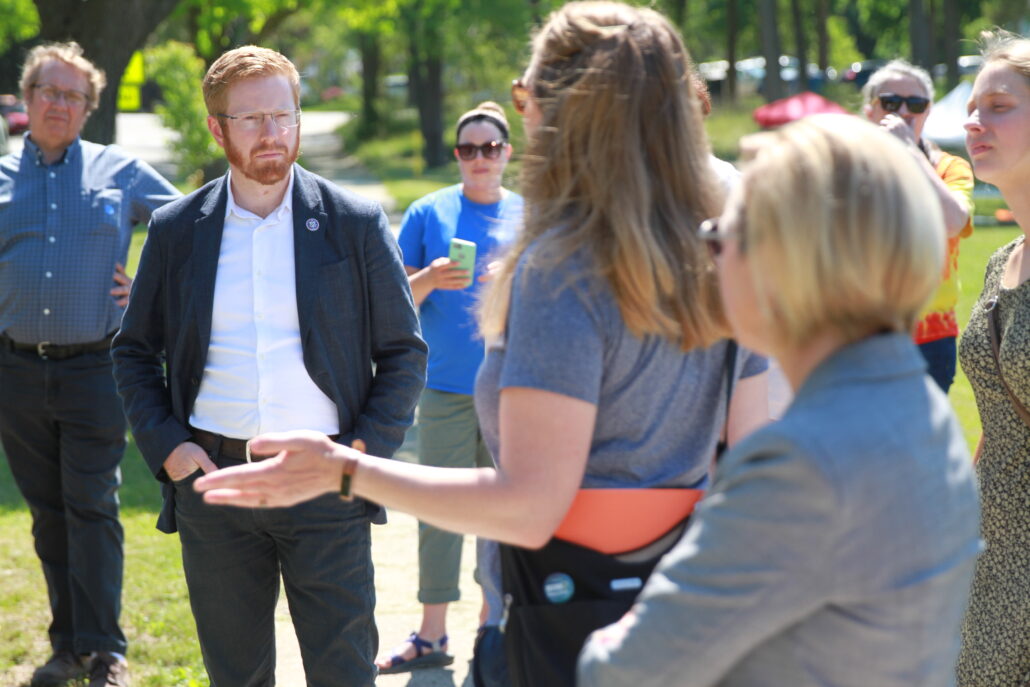 WMEAC, along with other organizations, gives a tour of community stormwater management project to Representative Peter Meijer

Photos for this piece were submitted by Elaine Sterrett Isely from WMEAC, Rick Treur from Representative Meijer’s office, and Raul Alverez from WellDesign Studio

West Michigan’s environmental organizations have a reputation for collaboration to improve water resources in the area. To educate Representative Peter Meijer about their work, WMEAC invited him among others to tour some of the federally funded green stormwater infrastructure projects on the morning of June 3rd.

Green stormwater infrastructure includes plantings and green space that allow stormwater to soak into the ground, instead of running off and carrying pollutants to our rivers, lakes, and streams. It is the number one source of water pollution.

“We wanted to provide the opportunity for our new U.S. Congressman to meet our partners and learn more about environmental protection projects in his District,” Elaine Sterrett Isely, the Director of Water Programs at WMEAC said over email.

The group first met at WMEAC headquarters and then headed to Calvin Avenue Basin at the site of Silver Creek Overflow. This part of the tour was hosted by Calvin University’s Plaster Creek Stewards. 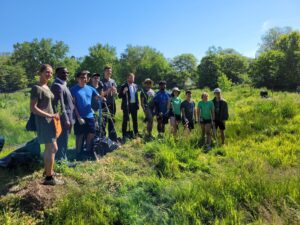 Silver Creek was one of the most polluted streams in West Michigan. The residents were left with roughly five square miles of very little green space, and very few environmental services. The Calvin Avenue Basin – also called the Silver Creek Overflow Basin – was designed to filter out runoff and pollution from the urban area. 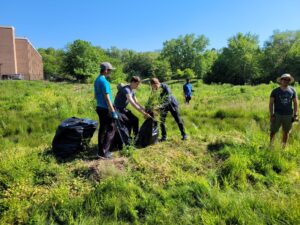 Above: Representative Meijer helping plant a native species in the basin. 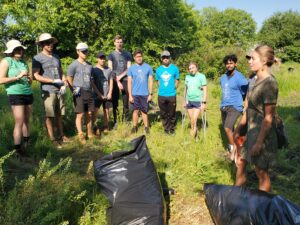 Above: Deanna Geelhoed from Plaster Creek Stewards explains how Calvin University student help with clean-up and maintenance at Calvin Avenue Basin, eventually training a Green Team of high school students to help with other project maintenance later in the in summer

The next stop on the tour was Next Step of West Michigan. Next Step is a faith-based organization that provides training for job skills for people who are affected by systematic discrimination. Mayor Bliss joined the tour at this point.

Above: Skills trainee explains her project to Representative Meijer and Major Bliss, who joined the tour at Next Step.

Next Step has been partnering with Plaster Creek Stewards to plant around 40 native trees in the empty lot besides their headquarters. Next Step uses local wood for their projects, like White Pine and Red and White Cedar, and they have intentionally planted these trees in the lot. 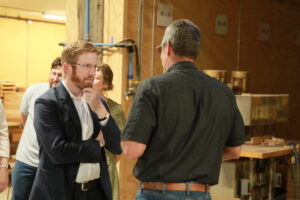 Above: Representative Meijer talking with Scott Jonkhoff, Director of Next Step of West Michigan production site. 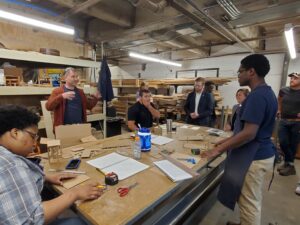 Above: David Bult, the Training Program Director, explains the training program at Next Steps. 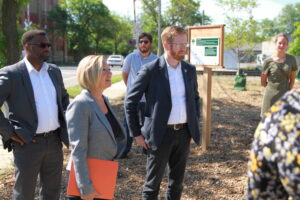 Above: Mark Washington, Mayor Bliss and Representative Meijer at the North Park site.

WMEAC taught students how to build rain barrels, and then the children led a workshop for parents and neighbors on solutions to stormwater pollution. The students also helped plant the curbside bioswale that captures and helps filter runoff. 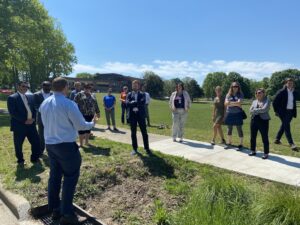 Above: Mike Staal, Professional Engineer and Acting Project Manager for the City of Grand Rapids, explaining the benefits of their work at North Park.

The tour concluded around noon back at WMEAC.

“Representative Meijer is very supportive of the Great Lakes Restoration Initiative and other programs designed to improve water resources in West Michigan”, said Sterrett Isely. “We appreciated the opportunity to show off some of our stormwater projects in Grand Rapids, and we look forward to working with him.”

PrevPreviousPFAS in a Pandemic: How Rockford has Continued to Fight for Remediation Throughout COVID-19
NextThe Grand River ExperienceNext