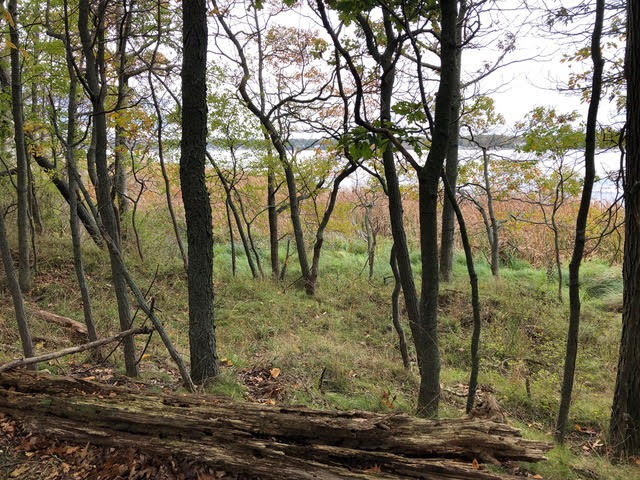 The Power of the People in Pollution Cleanups

When I first heard about the work of the citizen group working in White River Township to get the former Dupont site cleaned up, I was amazed at their accomplishments and commitment. With their high level of knowledge, expertise, and involvement, the CEIC (Chemours Environmental Impact Committee) exhibits the perfect example of the value a local citizens committee can provide to cleanup projects like these in our communities. Seeing a group like this working locally made the idea of advocating for better cleanup more personal, and emphasized the power each of us holds in being able to inspire action among large companies

When the DuPont Montague Works came to the White Lake area in the northern part of Muskegon County in the mid-1950s, the chemical manufacturing company produced Neoprene and Freon, the main components of Teflon, as well as other chemical products, including chlorofluorocarbons (CFCs) in later years. The community considered DuPont to be a good company, providing jobs and economic stimulation to the area, along with Hooker Chemical. The DuPont site is approximately 1300 acres, and lies between the shores of White Lake and Lake Michigan. It closed in 1996 when the manufacturing operation was moved to another location. During its operation, there was a spill of chemical products that contaminated groundwater at the site, and materials were disposed of in numerous locations on the property, a common practice at the time. Some time after the plant closed, it was found that the groundwater contamination extended into the deep aquifer below the company’s shoreline property on White Lake. There was little activity at the site until the White Lake Public Advisory Council (PAC), working with state and federal government officials to clean up pollution in and around White Lake, pushed for action on the site. The PAC was formed when White Lake was designated as one of the 43 Great Lakes Area of Concern (AOCs), or “toxic hotspots”. Since then, there has been a lengthy investigation of pollution at the site, initially by DuPont and now by a DuPont subsidiary, Chemours. The state’s environmental agency, the Department of Environment, Great Lakes, and Energy (EGLE) provides oversight. This case of remediation, redevelopment, and investigation looking into contamination at the DuPont site has highlighted the importance of community advisory groups in advocating for remediation and advancing site cleanup.

There have been concerns about DuPont’s contamination of the site since it closed. Particularly concerned about the potential effects of the company’s operations has been Claire Schlaff, whose home sits across from the DuPont site. Schlaff had previously been a member of the PAC and was concerned that when the lake was removed from the AOC list in 2014, the investigation of the DuPont site was still ongoing. Worried that cleanup action might slow or stop without the active presence of the PAC, Schlaff knew there needed to be a group to keep the work going.

Schlaff helped create the CEIC and invited others from the area to help oversee the investigation and future cleanup actions. The CEIC is officially recognized by the White River Township board to meet with officials from EGLE and Chemours regularly, to report back to the board on the investigation status and cleanup timetable, and to find information related to the corrective action on the Chemours site and report these findings. The goal of the citizen group is to advocate for the highest and most comprehensive cleanup and remediation of the DuPont site as possible. In other words, they make sure the cleanup gets done, and gets done right. Schlaff stated that “a lot of our work as a committee has been focused on educating ourselves about the site and about the laws and rules of hazardous waste management, so we can advocate for the correct action to be taken on behalf of the community in our conversations with Chemours and EGLE.”

The CEIC is made up of community members from a variety of backgrounds, including those with experience in chemical engineering, geology, and other fields that help increase understanding of the environmental impacts on the site. According to Schlaff,“The people bring their own expertise to the table that can help us determine particular areas of interest. The community knowledge provided by the group has helped us advocate for further testing of areas that has increased our awareness of the spread of contamination.” She also noted that because the CEIC members are from the area, they have knowledge of the site that  EGLE and Chemours may not have. This perspective has prompted the CEIC to seek out more comprehensive testing for contamination which led to the recognition of additional contaminated areas on the site. Schlaff also thinks it is important to remember that the community’s interests are different than both Chemours’ and EGLE’s.

The group’s goal is to to clean up the DuPont Chemours property as best possible and to restore it to its natural state, including removing polluted soils, cleansing groundwater, removing a lime pile, restoring Mirror Lake, removing a landfill from the Pierson Creek watershed, and obtaining a conservation easement on the White Lake section of the property, as it is valuable wetland habitat. The CEIC is currently working to finalize their list of priorities to present to EGLE as the site nears final cleanup decisions.

The CEIC’s commitment to tracking and participating in the DuPont investigation and cleanup is exceptional. The value of the group lies in their commitment to making sure the cleanup is done correctly and the knowledge they each have contributed to the investigation. What impressed me most was  the time they have spent to educate themselves on the issues that are part of the cleanup so that they are able to achieve the best results for their community. Mike Cockerill, the Supervisor of White River Township, has said “The committee has, for a long time, raised public awareness of these chemical properties. It has kept us, as a township, informed, and all the updates go to the public record so everyone can see them. It is helpful as we as a board will be asked to make decisions. We could not be more pleased with the committee.” Cokerill’s statements about the role of the group’s work showcases the value these committees can provide for increasing knowledge and advancing pollution cleanups by providing the knowledge and perspective of local stakeholders.

The people who are part of the CEIC came together and worked to create change in their own community. They understood the power they have for action, put in the time and effort to create change, and are using that together to influence the actions of a global company. The CEIC is truly an exceptional example of the value community groups have in situations like that of the DuPont Chemours cleanup of White River Township. But the lessons from their efforts can be taken and applied to all of our lives. If there are environmental issues in your community, you can leverage your power to inspire action and change. Each of us holds a unique power to do exactly what the CEIC has; we just have to take the opportunities to use them.