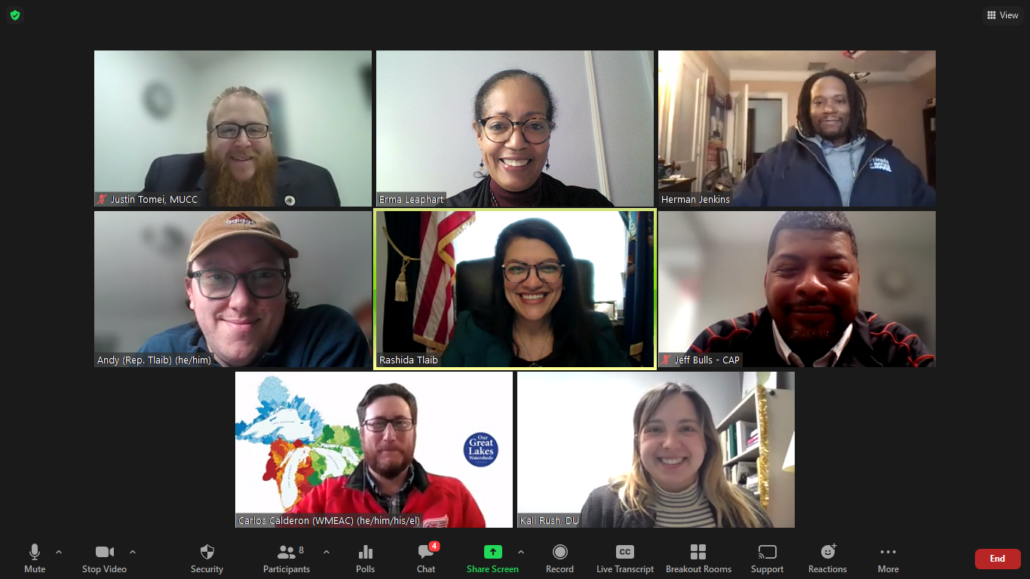 Advocating for Protection and Restoration Funding during Great Lakes Week

Every year, Great Lakes Week presents opportunities for Great Lakes advocates to interact with members of the U.S. Congress. This annual event is hosted by the Healing Our Waters – Great Lakes Coalition (HOW), whose members include regional agencies, legislators, local communities, tribes, businesses, nonprofits, and other environmental groups. This year, HOW’s Great Lakes Week was again virtual, and ran from February 28th through March 4th.

As WMEAC’s Policy Intern, I had the opportunity to participate in these congressional meetings and advocate for support of funding to restore and protect the Great Lakes through a variety of initiatives. The focus of Great Lakes Week is on educating elected officials about the importance of Great Lakes restoration investments and policies and getting their support for financial funding from the federal budget. The year’s priority agenda included “deep dive” sessions into funding restoration and protection efforts in the Great Lakes basin, efforts to help communities prepare for climate change, water infrastructure efforts including the Drinking Water State Revolving Fund and Clean Water State Revolving Fund, and strengthening clean water protections. These sessions allowed advocates like myself to develop a deeper understanding of the priority areas before meeting with congressional members and their staff.

To facilitate congressional meetings, teams of advocates were formed who would each participate in 4-5 meetings over the week. I was part of the Northern Michigan team, along with Jennifer McKay, Policy Director at Tip of the Mitt Watershed Council; Nick Green with the Michigan United Conservation Clubs; Ella Skrocki with Sleeping Bear Kayak and Surf; and Paul Spata, founder of Great Turtle Kayak Tours. Each individual tackled a specific priority area based on interest, personal impact, and knowledge.

Our team represented a unique mix of environmental, business, policy, and conservation perspectives. In particular, hearing the impacts of changing Great Lakes on the livelihoods of Ella Skrocki’s and Paul Spata’s businesses, and the immense impact that would be felt in their respective towns, were compelling components of the argument for funding Great Lakes efforts and the Great Lakes Restoration Initiative (GLRI). I felt particularly moved by Ella Skrocki’s family story of opening the first full service surf shop in the state in the Village of Empire, which sits in the heart of Sleeping Bear Dunes National Lakeshore. She passionately spoke about how she has been “raised by the lakes” and her small town’s reliance on tourism from the lakes to provide the livelihood for its residents. For the Village of Empire, beach closures due to algal blooms in past years has resulted in loss of tourism and the economic stimulation that comes from it. Paul Spata reflected similar thoughts in his respective town of Mackinac Island. Both emphasized the negative impacts of rising water levels on their businesses. They noted that Great Lakes protection was a necessary facet of ensuring the continuation of their small businesses that rely on the health of the Great Lakes ecosystem to inspire tourism in their communities.

Going into my group’s first congressional meeting, I was a little hesitant about how the interactions would take place. While I have written to lawmakers before, I had never spoken directly to staffers or congressional members, so these meetings were uncharted waters for me. Thankfully, Jennifer McKay provided experienced insight on the background of the members we were meeting with and tactics for how to best appeal to their interests and platforms in the conversations. Over the course of Great Lakes week, my group met with staffers from Congressman Kildee, Senator Stabenaw, Congressman Moolenaar, Congressman Bergman, and Senator Peters. After conducting our first meeting, I had a better sense of the logistics of these conversations and felt more comfortable heading into our remaining meetings.

For me, it seemed that these personal reflections were most impactful with members of Congress and their staff. For the most part, our meetings were conducted with staffers from the congressional members’ offices, although we did have the opportunity to meet with Congressman Bergman directly. In this meeting in particular, I felt that the Congressman responded most to these economic implications of a detoritating Great Lakes habitat and the results it would have for the citizens of the state. It was interesting to see the reaction to these stories and the questions resulting from these conversations with lawmakers.

As a result of HOW’s advocacy, lawmakers have a better sense of the importance of the issues in the Great Lakes and greater connections to the people that feel the effects. This makes them better situated to advocate for funding for restoration and protection efforts for the Great Lakes. Ultimately, participation in Great Lake Weeks allowed me the unique opportunity to advocate for the funding of water infrastructure, strengthened clean water protections, and climate action alongside like-minded advocates from vast industries in the state. This experience provided me with more knowledge about these issues and how to address discussing them with others. Moving forward, I am excited to carry the experiences, knowledge, and skills I gained from my participation in Great Lakes Week into my conversations with others to advocate for clean water for all and a healthy Great Lakes ecosystem.

For more information on the events of Great Lakes Week and Budget for Water Infrastructure Efforts:

PrevPreviousThe Power of the People in Pollution Cleanups
NextPaper or Plastic? Which bags are really the best for sustainable shopping?Next