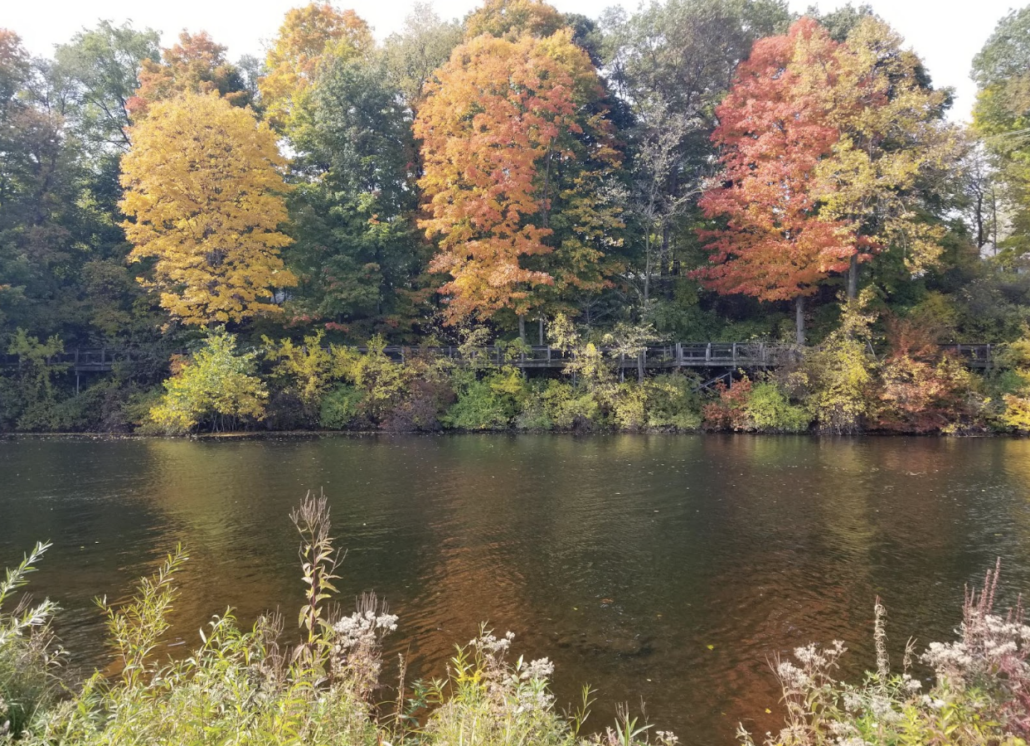 Rockford, MI – On a blustery Wednesday morning in October, a small group by the Rockford Dam watched salmon and steelhead attempt to climb the dam as several earnest fishermen fought to reel them in. As we waited for David LaGrand, candidate for the Michigan State Senate, I met members of the Wolverine Community Action Group (CAG), the Michigan League of Conservation Voters (LCV), and the Mayor of Rockford.

Several weeks before, LaGrand reached out to the Wolverine CAG to request a tour of the old Wolverine Worldwide tannery site along the river and learn about the PFAS contamination in the Rogue River.

For some background: One of the products produced at this tannery site was waterproof shoes. The waterproofing shoe chemicals contained PFAS. PFAS, or per- and polyfluoroalkyl substances, are known as “forever chemicals” since they do not break down easily and linger in the environment and bodies of water. Even at low levels, PFAS has been tied to harmful health effects in humans and animals.

Wolverine was dumping the tannery’s waste into sites in the surrounding area near the Rogue River, which led to concerns from the community. As a result, the Wolverine CAG was formed to spread awareness to people living in the contaminated area, especially those pulling water from contaminated wells, and to be an intermediary between the U.S Environmental Protection Agency (EPA) and the Northern Kent County communities during the site cleanup.

Once David arrived and pleasantries were made, PFAS activist Lynn McIntosh began the tour. Lynn was the first citizen in Rockford that started asking questions about the Wolverine tannery’s pollution of the area in 2009. She started the tour at the dam, pointing out the white foam gathered around the fall of water at its base. 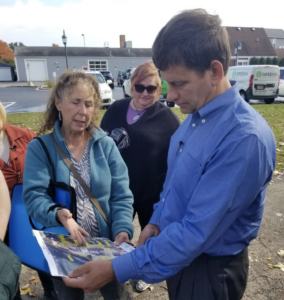 She said that the foam was PFAS. The same foam gathering around the fishermen’s waders? Also PFAS.

As we moved down the river trail, she pointed out signs along the waterway urging anyone that entered the river or came in contact with it to immediately wash their hands afterward. Other signs warned of the PFAS contamination in the water.

While we walked and discussed PFAS, pieces of Lynn’s own story came out. Wolverine had stopped operation at their Rockford tannery in 2009. She heard that same year that some of the buildings were being demolished. She also learned that no soil testing would be done on the site, despite tanneries’ notorious history of environmental pollution. Once demolition began, she watched trucks heavy with waste and fill leaving the site at all hours. With the site’s proximity to the river, she became concerned.

“Lynn was always out by the site, phone in hand, taking pictures and videos,” said Sandy Wynn-Stelt, chair of the Wolverine CAG and co-leader of our tour.

Lynn reached out to several state agencies – including the Department of Environmental Quality (now Department of Environment, Great Lakes, and Energy, or EGLE), the Rockford City Council, and local watershed activist groups with her concerns; but she was ignored. Eventually, with the help of other concerned neighbors, she and her team sent a case file to the EPA, documenting the demolition taking place at the site, including photos of the activity. The EPA took her concerns seriously and directed EGLE to investigate the site’s activity.

Meanwhile, Wolverine Worldwide began smear campaigns against Lynn, attempting to discredit her. But Lynn refused to back down.

“We are called to care about people,” Lynn said when asked how she kept fighting. “And we’re not supposed to be blind to injustice… Always remember the people, there are always good people, and you just have to keep finding them. They are there and it doesn’t take a lot of them.”

Eventually, the tour brought us to a building and a surrounding field. This old, beige building was the last standing building of the old Wolverine campus. In the grassy field adjacent to the building, several smaller trees with orange leaves and, most interestingly, black and white posts dot the landscape. Roughly waist-high, they look like the barriers you see around ATMs or gas stations to protect from car collisions. However, these posts are all monitoring wells, collecting data on the water quality and PFAS levels of the groundwater connected to the river. 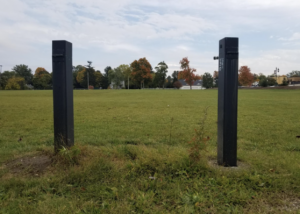 This was where our tour concluded. Before scattering back to their workdays, the Wolverine CAG members impressed on Representative LaGrand that the community needed two things: 1) a simple alert system to tell people that their water may be contaminated with PFAS so that the citizens could purchase filters and defend themselves from the chemicals and 2) the river cleaned up. With the interest from the public officials on the tour, the final feeling of the group was one of hope for continued public dialogue and engagement from their representatives.