Grand Rapids’ Michigan Street Corridor is projected to be less congested, less polluted and more accessible in the coming years.

A partnership between Spectrum Health, the City of Grand Rapids and the Grand Rapids metro transit service, the Rapid, will revamp the Rapid’s Route 19, which largely runs down Michigan Street through the Medical Mile.

Starting on August 27, Route 19 bus service will run 16 continuous hours each weekday, have bus stops at least every 15 minutes and be fare-free for all users. The program will last three years, then be reassessed by the three entities running it.

In tandem with the new services, the Prospect-Lyon-Crescent Street loop of Route 19 along Michigan Street will only head eastbound. The area will be serviced by Route 14, which is not fare-free.

After the pilot program commences, the route will run from 6 a.m. to 10 p.m. on weekdays. At peak hours—3-8 p.m.—buses will stop every 10 minutes. Buses will otherwise stop every 15 minutes.

Michael Bulthuis, the Rapid’s marketing and communications director, said that most people he talks to who don’t use the Rapid don’t do so because of long wait times. Miss a bus en route to or from work and a half-hour wait commences, he said. With the new Route 19 program, the wait is cut in half or by two-thirds, depending on the time of day.

Bulthuis said that Route 19 is the Rapid’s lowest-performing route. An average of 54 people use the service daily in a corridor that sees nearly 1.2 million visitors, employees and residents annually, and is on track to see more.

High ridership and community support were the two core motivators behind the Rapid joining the partnership, Bulthuis said.

The Rapid was the last to join the partnership. Spectrum was the first, approaching Grand Rapids about a fare-free, more accessible service.

Josh Naramore, director of the city’s mobile and parking services, said that the health care provider saw the partnership as a cost-effective means to cut back on their shuttle service program while still providing free transportation between their buildings.

Spectrum is West Michigan’s largest medical employer, and its main campus makes up the bulk of Michigan Corridor’s Medical Mile. The provider shuttles employees, patients and visitors with its private bus fleet or with free bus passes between its Michigan Street buildings and its satellite campuses miles away.

Grand Rapids saw the partnership as a way to answer the city’s Michigan Street Corridor Plan’s call for increased transit accessibility in the area.

The Michigan Street Corridor Plan drew criticism from Grand Rapids residents over its call for alternative transportation infrastructure. These residents feared that the corridor’s high car congestion would only worsen with more non-car options on the road, limiting parking and increasing traffic.

Spectrum directors served on committees in drafting Grand Rapids’ Master Plan, of which the Michigan Street Corridor plan is a part. 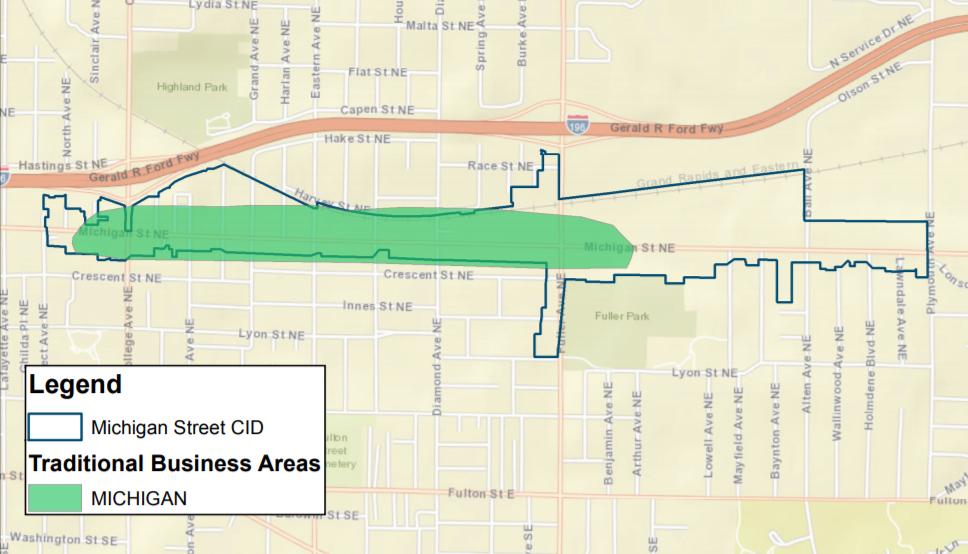 The Rapid believes that the revamped route will go beyond providing more accessible, equitable transit to corridor residents and visitors. The transit group believes traffic will be reduced, cutting all vehicular travel times. With fewer individual cars comes less car-induced pollution, too.

Spectrum and Grand Rapids will each cover 40 percent of the $732,500 annual cost of subsidizing fares. The Rapid will foot the remaining 20 percent of costs.

Route 19 connects to the fare-free portion of the Silver Line and the fare-free Downtown DASH. Both service’s fares are subsidized by the City.

In urban planning, “the pedestrian is paramount,” said Naramore. Even if someone were to drive somewhere downtown, they would need to walk to get to their destination. Transit services help keep the pedestrian in mind, he said.

Naramore’s vision is that neither the city nor Spectrum will need to subsidize Route 19’s fares at the end of the program’s three-year run. Ridership would be so high that free fare would be worth the investment.

According to Wood TV, the Route 19 program would be the latest of over $1 billion invested in the area in the past decade.

For a map of Route 19, visit the Rapid’s route page here.

Considering Solar? Installation May Be Easier Than Expectations
Scroll to top