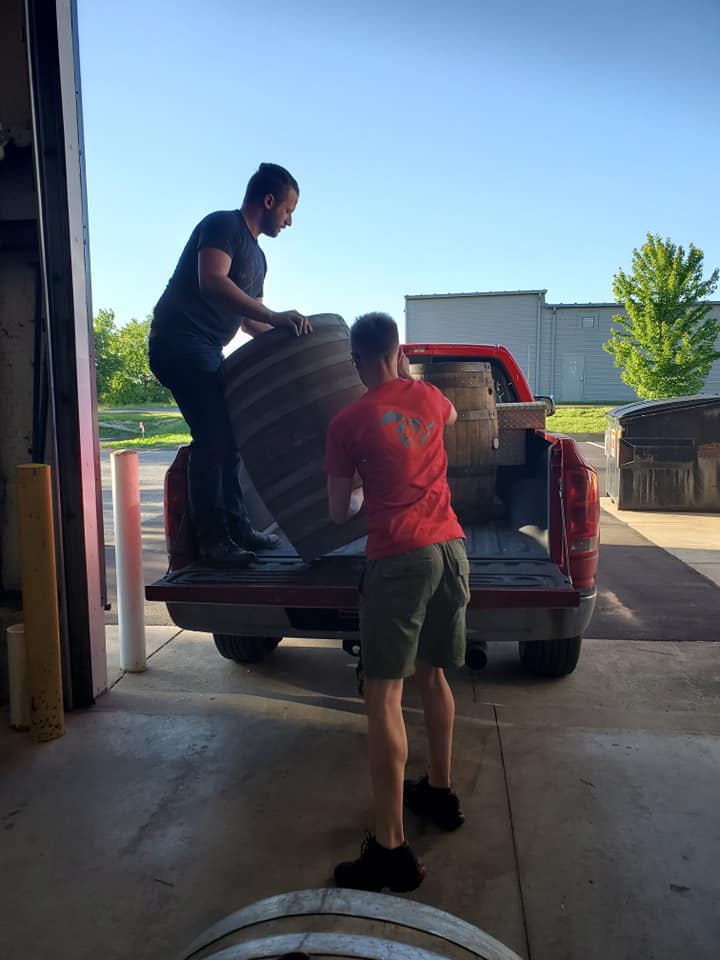 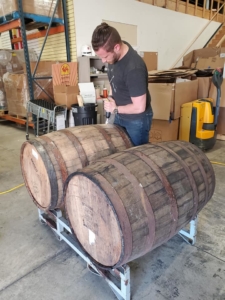 It makes sense that WMEAC would hold rain barrel workshops. Water quality is of huge importance to us, and rain barrels are one way to protect the health of our watershed. The workshops also connect staff and interns to individuals in the community, promoting environmentalism on a person to person basis. They give participants the ability to impact their world in a positive way, without forcing an immediate, radical change to their lives.

It’s less clear why a for-profit business would promote rain barrels. True, environmentalism and advocacy are fashionable things to promote in public, but ultimately a business exists to make a profit, and sustainability is expensive. It’s much easier to cut corners, use established techniques that promote immediate gain while straining the environment until it buckles. This is not to blame anyone, but simply to point out that, as Fivethirtyeight columnist Maggie Koreth-Baker wrote recently “the environmental damage we don’t like is deeply embedded in our lifestyles.”

But Brewery Vivant is a different kind of business.

Opened in 2010 by Jason and Kris Spaulding in an old funeral home, the brewery prioritized sustainability and stability from the outset, rather than growth. It was the first LEED certified brewery in the nation and tries to keep its footprint as close to Grand Rapids as possible, which means prioritizing local ingredients and a limited beer distribution. Many of their employees live less than a ten minute walk away.

Vivant also has a large number of barrels. Barrels which, after imparting the oaky-vanilla flavor of bourbon to hundreds of cans of beer, are no longer usable. So for Vivant, rain barrel workshops might make sense too.

On June 7th, WMEAC and Brewery Vivant held their first collaborative Rain Bourbon Barrel workshop. Held at the storeroom of Vivant’s newest venture, Broad Leaf Local Beer, the workshop mixed together old and new strands.  The procedure for making the rain barrels was essentially the same. Rain barrels are still rain barrels, regardless of what they are made of. But participant’s excitement mingled together with the atmosphere of the location gave the experience an entirely new energy. Sitting inside the warehouse of a brewery, tanks and barrels of beer loomed high over the participants. Most had a pint of Broad Leaf’s new beer in hand, chatting about how jealous their neighbors were going to be, while Brooks Twist, the engineer of the project, ran around looking for Bung stoppers. 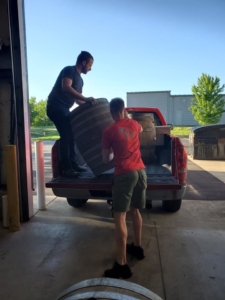 For Brooks, who I met up with at Brewery Vivant for a pint later that week, the workshop was a logical extension of what the business already does. Normally, when the bourbon barrels ran out of “juice”, Vivant would either sell the barrels or give them away to interested parties.  But Brooks told me that he liked the idea of the barrels continuing on with their intended purpose. And as rain barrels, they could contribute to the health of the community.

As Brooks would tell me later, Vivant’s sustainable business model is not just altruistic. The business just tries to focus on the bigger picture:

“If the water gets contaminated, what do we make our beer out of? What about if the hops or wheat don’t grow? We don’t have a product. So we try to make things as sustainable as we can. It costs a bit more, but I guess in the long run it’s worth it.”

The bourbon rain barrel workshop is another example of the brewery thinking beyond the current profit margin. Vivant may not make any profit from donating time, material, and space to WMEAC, but the more barrels connected to houses in Grand Rapids, the healthier our streams and rivers, and by proxy our water supply. This indirectly affects the brewery’s cost of production, and prevents them from adding additional infrastructure, complicating the brewing process. It also keeps their customers healthy, which means a consistent revenue stream.

To be entirely transparent, I adore Brewery Vivant and it’s “weird cousin”, Broad leaf. I did even before I started working with WMEAC. There’s a chalice sitting up in front of the big stained glass window in the Vivant taproom with my name on it. I’m personal friends with much of their waitstaff, probably because I visit at least twice a week. But beyond my love of a good beer and good conversation, I respect Vivant’s business model from a moral perspective. It and other businesses like it realize that their environment is not just one issue to choose from among others; it is the issue. After all, without a healthy ecosystem, without healthy people, the entrepreneurs who run the service industry have no business. How would you sustain profit without customers?  On what do you spend your profits if all that’s worth spending on has been destroyed?

As the ecologist and philosopher Arne Næss once said, “All things hang together,” business included. 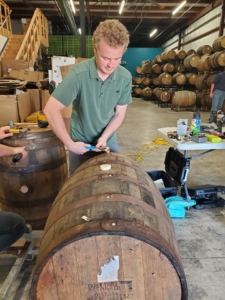 Finishing my second pint of Odeon, a taproom exclusive dark farmhouse ale, I asked Brooks what he thought the future of the Bourbon barrel project was. “I wish we’d publicized it more,” I mused.

“Oh, we didn’t want a lot of people.” he said, “this was an experiment. To test how it would go.”

“An experiment. So you think you’ll do more of them? I hope we can.”

Brooks shrugged and smiled. “Hey, I just emptied forty barrels yesterday. I’ve got to do something with them.”

WMEAC and Brewery Vivant have yet to finalize a time the next bourbon rain barrel workshop, though we hope to schedule one within the next year. In the meantime, WMEAC has conventional rain barrel workshops regularly, as well as storm water solutions classes.  You can find them on our website, or look for our posters scattered about town for more details.